The Evolution of Sleep Part 2

Like any parent, Moviedad and I have been in search of a quality night's sleep-- for everyone in our little family.  It wasn't easy, but it's been getting better.  But like any good plan, it needs tweaked every now and again.  You can read The Evolution of Sleep Part 1 here.
When Gus and Jack were ten months old, I thought we had finally figured out the perfect sleeping arrangement.  We were all in the same bed.  I thought surely a king sized mattress on the floor would fit our sleeping needs for years to come.  I was wrong.  I hadn't taken into account the fact that Gus is a steamroller.
There were nights that putting this kid to sleep resembled a wrestling match more than anything else.  Moviedad would take Jack to the other room, and sing and dance him to sleep.  Gus and I would square off in the bed.  He would start off nursing laying down along side me.  Then, his feet would start moving and he's arch his back just so... and he'd end up laying on his back with his feet up by my head, still nursing.  Ouch.  Then he would pop off, and beeline it for the window.  He would knock and press his little cheek against the cold panes.  Before I knew it, he had zoomed over to nurse for another five seconds.  Then he'd roll away.  I hate the idea of restraining my boys, especially when they're doing something as nurturing as nursing.  So I let him roll.  Then I pulled him back.  And he nursed for five seconds and rolled away again.  This continued on for as long as 40 minutes sometimes.
Gus fights sleep like a samurai.  He still does, but only at naptime now.  At bedtime he nurses and falls asleep with blessed alacrity.
So Gus the sleepy steamroller, in bed next to his brother, was a recipe for wakefulness.  We tried Gus next to me.  He rolled over Jack in an effort to snuggle next to his daddy's warmth.  We started Gus off next to Moviedad.  He rolled over Jack in an effort to get to me to nurse.  We tried having Jack between us, and Gus sleeping on top of my side, nestled in a perfect position to nurse and snuggle all night.  That night he rolled off of me and onto Jack.  Gus was the only one who stayed asleep through all of this.  Jack, Moviedad, and I woke up a lot.  It was not a restful way to spend a night.
Enter the crib mattress.  We put it on the floor next to our mattress, stuffed couch cushions and quilts between it and the closet doors, and put Gus on it.  He and Jack spent the first ten minutes happily exploring the skritching sound their footy pajamas made on the bare mattress.  Then, we put a pad and sheet on it, and voila!  Extended sleeping space. 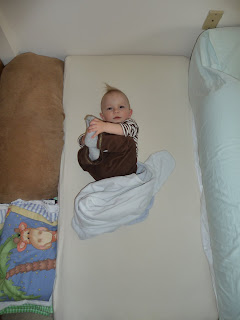 I nursed the boys like normal, they slept a few hours stretched out on the big bed, Moviedad and I did our adult-time thing, and when we came to bed we gently transferred Gus onto the little mattress.
And he slept straight through for seven hours.
I sleep on the side of the bed next to the little mattress, within arm's reach of the baby down there.  I can still hear his breathing and cover him when it gets cold.  But Gus really enjoys his extra space.  And the rest of us enjoy the extra sleep.
We've taken to alternating which baby sleeps in his own space.  But both of them know exactly where I am when they need me at night.  I'll often wake up to a little face peeping over the body pillow divider before climbing up next to me to nurse.  And sometimes I'll wake up to find both babies in the big bed.
It all depends on the need and the night.
Posted by Mama Mo at 11:26 AM

Mama Mo
I'm a comfortably broken-in stay-at-home mom of twins. As Mama has become my job and my passion, I've come to realize that I'm an attached parent. I tend to take my attachment parenting cafeteria style, but I am passionate about breastfeeding and bed sharing. Welcome to my tiny corner of the internet, and thanks for reading!

My babies! Gus and Jack are 2 years old, and growing everyday. I am in a state of constant wonderment at the new skills they pick up and the way their eyes shine with love when they look at me.
Gus is so nicknamed because he does everything with gusto. He's been this way since he was a tiny preemie, and he continues to this day.
Jack is my bouncy baby, my jack-in-the-box baby. His knees have been like little springs since before he was strong enough to hold himself up.
MovieDad is my husband, my helper, the love of my life. I literally could not do any of this without his strength and support. I'm sure I could think of more cliches, but I think I hear someone calling "Mama!"...